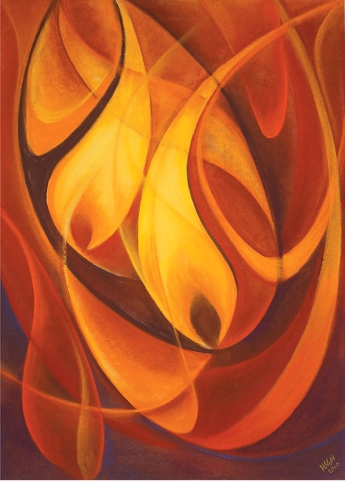 May the God of our Lord Jesus Christ, the Father of glory, give you a spirit of wisdom and perception of what is revealed, to bring you to full knowledge of him. May he enlighten the eyes of your mind so that you can see what hope his call holds for you, what rich glories he has promised the saints will inherit and how infinitely great is the power that he has exercised for us believers. This you can tell from the strength of his power at work in Christ, when he used it to raise him from the dead and to make him sit at his right hand, in heaven, far above every Sovereignty, Authority, Power, or Domination, or any other name that can be named not only in this age but also in the age to come. He has put all things under his feet and made him, as the ruler of everything, the head of the Church; which is his body, the fullness of him who fills the whole creation.

The image is of the Holy Spirit, and is, I believe an image produced by Turvey Abbey in preparation for the visit to the UK of Pope Benedict.

In these days before Pentecost, how good to find ourselves beneficiaries of this prayer of Paul that his readers receive the spirit of wisdom…

To make his prayer your own you might like to join the Church in her novena of prayer for Pentecost. Don’t worry about joining late, someone somewhere, is sure to have been praying for you up to now…

You can find the Novena at http://wp.me/p4lRyj-jB

Back in the ’60s, argument about the where, how and who of God were all the rage.

John Robinson in Honest to God, published in 1963, called contemporary Christians to a more sophisticated way of thinking of God, and speaking of God. It was unworthy of God, he argued, in a scientific age, to naively speak of heaven as up there, or God as up there.

No such problems seem to preoccupy the author of the psalm we sing on Sunday.

All peoples, clap your hands,
cry to God with shouts of joy!
For the Lord, the Most High, we must fear,
great king over all the earth.

God is king of all the earth,
sing praise with all your skill.
God is king over the nations;
God reigns on his holy throne. 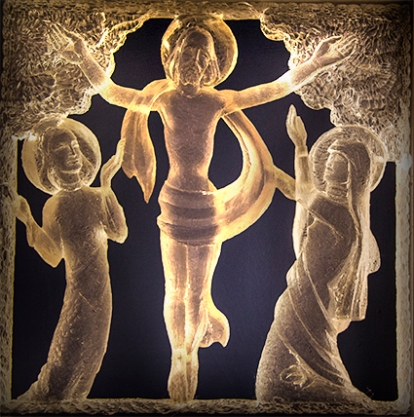 As we begin to prepare for Sunday, the feast of the Ascension, it is a time for taking stock, of noting what responsibilities have been handed on to us.

Again, the first reading comes from the Acts of the Apostles, indeed is the very first sentences of that book…

With the Ascension Jesus bodily ministry on earth comes to an end, or at least his direct bodily ministry. His Body remains present as the Church and her members.

The prayer ascribed to St Teresa of Avilla makes this point with great simplicity and power:

Image of the Ascension is taken from the Rosary Triptych by Arthur Fleischman (c) the Fleischman Foundation. Photograph (c) Allen Morris.

The first reading on Sunday came from Acts of the Apostles. It was a reading about a very specific set of people at a very particular time.

What did we hear on Sunday? What do we hear today?

In the Acts of the Apostles, Philip’s proclamation of Christ, the acceptance of the word of God brings healing. However in this episode from Acts, that is only the start of things. Acts present the gift of the Holy Spirit as also needed for the fuller entry into the life of God, to live as Christ in our daily lives. There is a ‘new Pentecost’ for those perviously ‘outisde’ but who now come to faith in Christ.

The radical new unity between ‘insiders’ and ‘outsiders’ is a work of Christ, effected in the Spirit. It is not that Samaritans join the Church, and are a part of it. The Church has changed, grown, and has to rediscover her meaning in this new diversity.

The (new) Christian community of Samaria is the Church in its locale, and so cannot be considered independent of the rest of the Church, defined simply by its (as it were, private) relationship with Christ. It needs to live by the Spirit, who binds and unites. The visible sign of the Spirit is given here by the apostles. Their ministry itself symbolising the unity of the Church, as well as the means by which, here, the Spirit is given.

This, of course, is what we pray for at each Mass, when praying that the Holy Spirit will come upon us as the bread and wine, that together, but in our different ways, we become the Body of Christ. 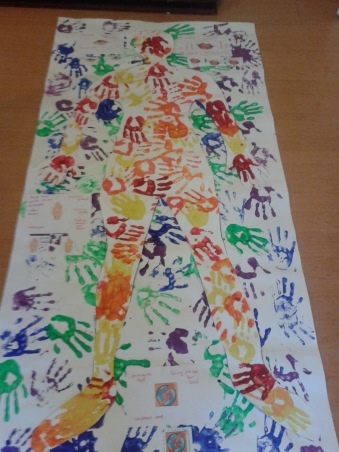 The Church teaches that Christ is present in our celebration of Mass in various ways, really present in diverse ways.

Christ is always present in His Church, especially in her liturgical celebrations. He is present in the sacrifice of the Mass, not only in the person of His minister, “the same now offering, through the ministry of priests, who formerly offered himself on the cross”, but especially under the Eucharistic species. By His power He is present in the sacraments, so that when a man baptizes it is really Christ Himself who baptizes. He is present in His word, since it is He Himself who speaks when the holy scriptures are read in the Church. He is present, lastly, when the Church prays and sings, for He promised: “Where two or three are gathered together in my name, there am I in the midst of them” (Matt. 18:20) .

Sometimes we focus almost exclusively on the presence of the Lord in the Eucharistic species – the Bread and Wine that is his Body and Blood, his very self and life offered us as food and drink.

Maybe the most scandalous presence of the Lord is in the gathering of the Church – the Lord present in this one, that one, each one who are members of the Body of Christ.

How and as whom did the Lord make himself present to you in the gathering for Mass on Sunday? A child? An elderly person? Someone filled with joy? Someone who seemed on the point of tears? Who?

What do you learn from His presence in them, as them?

Gandhi taught: ‘If you don’t find God in the next person you meet, it is a waste of time looking for him further’ Maybe he would have been delighted (and perhaps surprised) to know how literally the Church can take that.

Notice the meaning (or at least some of the meanings) present in the Collect prayer from yesterday’s Mass.

We come before God needful…

that we may celebrate with heartfelt devotion these days of joy,

…even our (own) prayer is in some sense the work of God in us. The Catholic instinct, of course, is that we pray the Liturgy by joining with Christ and the Church in heaven, as well as here on earth and our own particular gathering

which we keep in honour of the risen Lord,

We are still in Easter, and the wonder of the Resurrection our inspiration…

and that what we relive in remembrance

Jesus asked us to ‘do this in memory of me’, so we specifically remember the gift of Eucharist, but all we do in the Mass is about remembering the saving love, and the saving actions, of God. But our remembering is not just a mental activity – we re-live in our remembering…

we may always hold to in what we do.

…so that through the sacred remembering, enabled by God, we may learn to live.

Through our Lord Jesus Christ, your Son,

who lives and reigns with you in the unity of the Holy Spirit,

one God, for ever and ever.

Our Christian prayer is offered in and through Christ, to the Father, with (in) the Holy Spirit. Our present prayer somehow anticipates our hoped-for and sometimes longed-for final sharing in the life of God, the Three-in-One.

So much in one short prayer. Often on a Sunday there is little opportunity to give full attention to the Collect. Returning to the Sunday Collect in our private daily prayer can be a fruitful spiritual practice.

Today Pope Francis celebrates Mass in Bethlehem and pays a private visit to the grotto of the Nativity.

These photos show, first, the centre of Bethlehem, with views across Manger Square, away from the Basilica of the Nativity:

Views of the interior of the 6th Century Basilica

And then the grottos under the Basilica, first that which was used by St Jerome during his stay there, while working on the Vulgate translation of the scriptures.

And finally the grotto of the Nativity itself, with the star under the altar indicating by tradition the place where the Word was born, where Jesus Christ was born of Mary.

Bethlehem today is a town proud of its heritage but kept from most of the Palestinian people by the travel restrictions imposed by Israel. The justification was found in the acts of terrorism by Palestinians against Israelis. Other nations are not prepared to respond to…