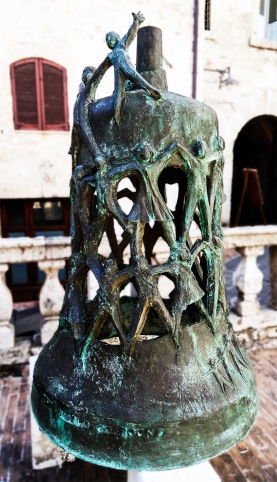 The first reading on Sunday, the 3rd Sunday of Easter, comes from the Easter book, the Acts of the Apostles.

Peter said to the people: ‘You are Israelites, and it is the God of Abraham, Isaac and Jacob, the God of our ancestors, who has glorified his servant Jesus, the same Jesus you handed over and then disowned in the presence of Pilate after Pilate had decided to release him. It was you who accused the Holy One, the Just One, you who demanded the reprieve of a murderer while you killed the prince of life. God, however, raised him from the dead, and to that fact we are the witnesses.

‘Now I know, brothers, that neither you nor your leaders had any idea what you were really doing; this was the way God carried out what he had foretold, when he said through all his prophets that his Christ would suffer. Now you must repent and turn to God, so that your sins may be wiped out.’

In the years since, we have become very used to the distinction between Jew and Christian, a distinction sometimes enforced with horrifying results.

In this passage Peter speaks to his own people, his own generation: a Jew who believes in the Resurrection of Jesus to those who do not; and he speaks to. He places the greater blame on the leadership – always something quite easy to do.

But all are called to repentance, to turn from what is false and destructive and back to what is true and good and healing.

That call is extended to all in our age, leaders and led, those who think themselves in the right, and those who fear that that they may be in the wrong.

God’s love is for all.

The first reading at Mass on Sunday, unsurprisingly, describes the first Pentecost.

When Pentecost day came round, they had all met in one room, when suddenly they heard what sounded like a powerful wind from heaven, the noise of which filled the entire house in which they were sitting; and something appeared to them that seemed like tongues of fire; these separated and came to rest on the head of each of them. They were all filled with the Holy Spirit, and began to speak foreign languages as the Spirit gave them the gift of speech.

Now there were devout men living in Jerusalem from every nation under heaven, and at this sound they all assembled, each one bewildered to hear these men speaking his own language. They were amazed and astonished. ‘Surely’ they said ‘all these men speaking are Galileans? How does it happen that each of us hears them in his own native language? Parthians, Medes and Elamites; people from Mesopotamia, Judaea and Cappadocia, Pontus and Asia, Phrygia and Pamphylia, Egypt and the parts of Libya round Cyrene; as well as visitors from Rome – Jews and proselytes alike – Cretans and Arabs; we hear them preaching in our own language about the marvels of God.’

The reading witnesses to an openness and togetherness, born of the Holy Spirit, that offers a striking contrast to the xenophobia and racism that seems to have reared its head in recent European elections.

At the Vigil for Pentecost (a vigil neglected in most parishes, it seems) the first reading offered is the following:

Throughout the earth men spoke the same language, with the same vocabulary. Now as they moved eastwards they found a plain in the land of Shinar where they settled. They said to one another, ‘Come, let us make bricks and bake them in the fire.’ (For stone they used bricks, and for mortar they used bitumen). ‘Come,’ they said ‘let us build ourselves a town and a tower with its top reaching heaven. Let us make a name for ourselves, so that we may not be scattered about the whole earth.’

Now the Lord came down to see the town and the tower that the sons of man had built. ‘So they are all a single people with a single language!’ said the Lord. ‘This is but the start of their undertakings! There will be nothing too hard for them to do. Come, let us go down and confuse their language on the spot so that they can no longer understand one another.’ The Lord scattered them thence over the whole face of the earth, and they stopped building the town. It was named Babel therefore, because there the Lord confused the language of the whole earth. It was from there that the Lord scattered them over the whole face of the earth.

In terms of the Bible, Pentecost is the after, Babel the before. Which is most like our present?

And, by the way, do you know where Parthian, Medes, Elamites etc come from? And where Pontus, Phrygia and Pamphylia are? If not check out this map.

It is one of the excellent resources offered in the ESV study bible. For more details see www.esvbible.org

Other image is from http://archive.xaviermissionaries.org/M_Call/NoBorders/NoBorders15.htm

As we begin to prepare for Sunday, the feast of the Ascension, it is a time for taking stock, of noting what responsibilities have been handed on to us.

Again, the first reading comes from the Acts of the Apostles, indeed is the very first sentences of that book…

With the Ascension Jesus bodily ministry on earth comes to an end, or at least his direct bodily ministry. His Body remains present as the Church and her members.

The prayer ascribed to St Teresa of Avilla makes this point with great simplicity and power:

Image of the Ascension is taken from the Rosary Triptych by Arthur Fleischman (c) the Fleischman Foundation. Photograph (c) Allen Morris.

The first reading on Sunday came from Acts of the Apostles. It was a reading about a very specific set of people at a very particular time.

What did we hear on Sunday? What do we hear today?

In the Acts of the Apostles, Philip’s proclamation of Christ, the acceptance of the word of God brings healing. However in this episode from Acts, that is only the start of things. Acts present the gift of the Holy Spirit as also needed for the fuller entry into the life of God, to live as Christ in our daily lives. There is a ‘new Pentecost’ for those perviously ‘outisde’ but who now come to faith in Christ.

The radical new unity between ‘insiders’ and ‘outsiders’ is a work of Christ, effected in the Spirit. It is not that Samaritans join the Church, and are a part of it. The Church has changed, grown, and has to rediscover her meaning in this new diversity.

The (new) Christian community of Samaria is the Church in its locale, and so cannot be considered independent of the rest of the Church, defined simply by its (as it were, private) relationship with Christ. It needs to live by the Spirit, who binds and unites. The visible sign of the Spirit is given here by the apostles. Their ministry itself symbolising the unity of the Church, as well as the means by which, here, the Spirit is given.

This, of course, is what we pray for at each Mass, when praying that the Holy Spirit will come upon us as the bread and wine, that together, but in our different ways, we become the Body of Christ.