The second reading on Sunday continues our reading of Paul’s letter to the Ephesians.

And it contains both challenge and encouragement.

I want to urge you in the name of the Lord, not to go on living the aimless kind of life that pagans live. Now that is hardly the way you have learnt from Christ, unless you failed to hear him properly when you were taught what the truth is in Jesus. You must give up your old way of life; you must put aside your old self, which gets corrupted by following illusory desires. Your mind must be renewed by a spiritual revolution so that you can put on the new self that has been created in God’s way, in the goodness and holiness of the truth.

The Lord comes to us to change us. He comes to heal, restore, guide us to ourselves, to the fulness of our humanity to likeness to him.

This change was gifted to us in baptism, but our receiving, ‘owning’, and living of this gift is the work for a lifetime. We need to grow into it, to become skilled in being ourselves.

Today is the day for freshly welcoming and enjoying the gift and the opportunities it brings us.

On the 18th Sunday of Ordinary time in Year B, ie next Sunday, the gospel reading continues the reading from chapter 6 of the Gospel of John, begun last week.

Last week’s passage ended with Jesus heading for the hills to escape the enthusiasm of the crowd, that would crown him king.

When the people saw that neither Jesus nor his disciples were there, they got into those boats and crossed to Capernaum to look for Jesus. When they found him on the other side, they said to him, ‘Rabbi, when did you come here?’
Jesus answered:

Then they said to him, ‘What must we do if we are to do the works that God wants?’ Jesus gave them this answer, ‘This is working for God: you must believe in the one he has sent.’ So they said, ‘What sign will you give to show us that we should believe in you? What work will you do? Our fathers had manna to eat in the desert; as scripture says: He gave them bread from heaven to eat.’ Jesus answered:

‘Sir,’ they said ‘give us that bread always.’ Jesus answered:

On their meeting the people seem a little sheepish, the enthusiasm of yesterday (?) seems to have ebbed away. All they can ask is ‘when did you come here?’ Hardly the most pressing question to ask the prophet they would make king!

Jesus responds to their clumsiness with words that challenge. He calls them to something more than they might be asking for.

They show themselves willing, just about.

But this passage ends with challenge also. They want bread, life giving bread. Jesus offers (only) himself. 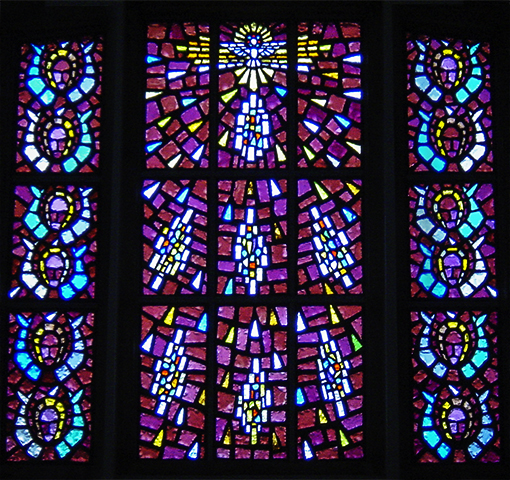 The second reading at Mass on Sunday last, the 17th in Ordinary time, came from Paul’s letter to the Ephesians. Like so much of that letter it exhorts to harmony, unity in Christ.

I, the prisoner in the Lord, implore you to lead a life worthy of your vocation. Bear with one another charitably, in complete selflessness, gentleness and patience. Do all you can to preserve the unity of the Spirit by the peace that binds you together. There is one Body, one Spirit, just as you were all called into one and the same hope when you were called. There is one Lord, one faith, one baptism, and one God who is Father of all, over all, through all and within all.

Our Christian vocation is to live and share the peace of Christ. In him we find our security, and the security that is his love and care, is his guidance and righteousness, is the gift we have to share with others.

As you journey through today, what do you encounter that promotes well-being and holiness?

The Prayer after Communion on Sunday last, the 17th Sunday of the Year, had the Church asking that she might not fail in the way so many of those fed with bread and fish on the hillside of Galilee in fact did fail, at least for a while.

Fed by the Bread of Life we are fed for life, not just to take away any pangs of physical hunger. We pray to be ready for that more.

Prayer after Communion We have consumed, O Lord, this divine Sacrament, the perpetual memorial of the Passion of your Son; grant, we pray, that this gift, which he himself gave us with love beyond all telling, may profit us for salvation. Through Christ our Lord.

The spiritual food that is Christ and that we share in at Mass, especially, feeds us for eternal life.

Yesterday’s Gospel, that for the 17th Sunday in Year B, began the Church’s reading of chapter 6 of John’s Gospel.

Jesus went off to the other side of the Sea of Galilee – or of Tiberias – and a large crowd followed him, impressed by the signs he gave by curing the sick. Jesus climbed the hillside, and sat down there with his disciples. It was shortly before the Jewish feast of Passover.

Looking up, Jesus saw the crowds approaching and said to Philip, ‘Where can we buy some bread for these people to eat?’ He only said this to test Philip; he himself knew exactly what he was going to do. Philip answered, ‘Two hundred denarii would only buy enough to give them a small piece each.’ One of his disciples, Andrew, Simon Peter’s brother, said, ‘There is a small boy here with five barley loaves and two fish; but what is that between so many?’

Jesus said to them, ‘Make the people sit down.’ There was plenty of grass there, and as many as five thousand men sat down. Then Jesus took the loaves, gave thanks, and gave them out to all who were sitting ready; he then did the same with the fish, giving out as much as was wanted.

When they had eaten enough he said to the disciples, ‘Pick up the pieces left over, so that nothing gets wasted.’ So they picked them up, and filled twelve hampers with scraps left over from the meal of five barley loaves. The people, seeing this sign that he had given, said, ‘This really is the prophet who is to come into the world.’ Jesus, who could see they were about to come and take him by force and make him king, escaped back to the hills by himself.

A story that starts of so promisingly ends with Jesus fleeing for the hills.

Why does the crowd want to make him king?

They want to make him king because they find in him the fulfilment of God’s promises. He sets the sick free from their illness; he liberates prisoners from slavery to sin; he feeds the hungry. God comes with his prophet to set his people free. Is Jesus a new Moses? Maybe the closeness of Passover might put the idea in people’s heads. But, more than a prophet, they want a king!

They want setting free from their oppressors, sickness, sin, hunger and especially the Romans. So they want a king – a new Maccabean, a new Solomon, a new David, a new Saul. But they have forgotten what the scriptures teaches… Israel is not well served by its kings. Saul was a bad king; David an adulterer who had such promise but did not deliver; Solomon who had wisdom amongst the nations but whose kingdom collapsed after him; and the Maccabees who won back Israel but lost it again, amidst corruption and all the rest. But the crowd ishungry – for a new king. There is the saying ‘third time lucky’, but this is getting ridiculous.

Why, faced with this enthusiasm for his coronation or kingly anointing, does Jesus flee for the hills?

In his baptism he received the anointing that made him Priest, Prophet and King. And his Kingship is lived out in service and love – in sacrifice, the gift of his Body and Blood as John makes clear in the rest of chapter 6.

Israel has its king – as I Samuel makes very clear. And it is God.

Jesus is already the faithful son of the Father. He proclaims the nearness of the kingdom, but not in anything as vapid and passing as a new monarchy, rather a kingdom firmly established in the fatherhood of God.

He shares the first fruits of the kingdom, but people are greedy for ‘more’. They seek to take the kingdom by force and not receive it as gift.

They have received so much, been fed to the full but they are still hungry, for finally they are not satisfied by what God offers.

Photograph of statue of Jesus teaching in the hills of Galilee, Domus Galilei. (c) 2012, Allen Morris

The gospel at Mass today, the 17th Sunday of Ordinary time, tells of the multiplication of loaves and fishes to feed the hungry crowd.

In the first reading there is a foreshadowing of the miraculous feeding in the hills of Galilee.

A man came from Baal-shalishah, bringing Elisha, the man of God, bread from the first-fruits, twenty barley loaves and fresh grain in the ear.’ ‘Give it to the people to eat’, Elisha said. But his servant replied, ‘How can I serve this to a hundred men?’ ‘Give it to the people to eat’ he insisted ‘for the Lord says this, “They will eat and have some left over.”’ He served them; they ate and had some left over, as the Lord had said.

The Old Testament establishes patterns that find their fulfilment in the New. And those great miracles of love that we find in the New Testament have their echoes, their wake, in our own lives.

The acts of love and kindness and generosity that we sometimes do for others, or others sometimes do for us, again and again have their true origin not just in human kindness, but in the love of God communicated in Christ, the living Bread.

We do well to thank one another for the part we play but, above all and with all, let us give thanks also to God.

The responsorial psalm on Sunday, the 17th Sunday of the Year, responds to the care and support offered by angels to the care-worn prophet, and by Jesus to the weary and hungry crowd.

But to what else, in our own direct experience, does it connect?

All your creatures shall thank you, O Lord,
and your friends shall repeat their blessing.
They shall speak of the glory of your reign
and declare your might, O God.

The eyes of all creatures look to you
and you give them their food in due time.
You open wide your hand,
grant the desires of all who live.

The Lord is just in all his ways
and loving in all his deeds.
He is close to all who call him,
who call on him from their hearts.

Thanksgiving is the characteristic feature of Christian prayer. God’s open hands are met by ours.

For what, today, do you need to give thanks?