The first reading on Sunday, the 3rd Sunday of Easter, comes from the Easter book, the Acts of the Apostles.

Peter said to the people: ‘You are Israelites, and it is the God of Abraham, Isaac and Jacob, the God of our ancestors, who has glorified his servant Jesus, the same Jesus you handed over and then disowned in the presence of Pilate after Pilate had decided to release him. It was you who accused the Holy One, the Just One, you who demanded the reprieve of a murderer while you killed the prince of life. God, however, raised him from the dead, and to that fact we are the witnesses.

‘Now I know, brothers, that neither you nor your leaders had any idea what you were really doing; this was the way God carried out what he had foretold, when he said through all his prophets that his Christ would suffer. Now you must repent and turn to God, so that your sins may be wiped out.’

In the years since, we have become very used to the distinction between Jew and Christian, a distinction sometimes enforced with horrifying results.

In this passage Peter speaks to his own people, his own generation: a Jew who believes in the Resurrection of Jesus to those who do not; and he speaks to. He places the greater blame on the leadership – always something quite easy to do.

But all are called to repentance, to turn from what is false and destructive and back to what is true and good and healing.

That call is extended to all in our age, leaders and led, those who think themselves in the right, and those who fear that that they may be in the wrong.

God’s love is for all.

The first reading at Mass on Sunday, the 3rd Sunday in Ordinary Time, was taken from the book of Jonah.

The word of the Lord was addressed to Jonah: ‘Up!’ he said ‘Go to Nineveh, the great city, and preach to them as I told you to.’ Jonah set out and went to Nineveh in obedience to the word of the Lord. Now Nineveh was a city great beyond compare: it took three days to cross it. Jonah went on into the city, making a day’s journey. He preached in these words, ‘Only forty days more and Nineveh is going to be destroyed.’ And the people of Nineveh believed in God; they proclaimed a fast and put on sackcloth, from the greatest to the least.

God saw their efforts to renounce their evil behaviour. And God relented: he did not inflict on them the disaster which he had threatened.

Famously, Jonah is mighty displeased at the conversion of the Ninevites. He’d rather see them unrepentant and blasted into Kingdom come by the wrath of God.

Poor Jonah is not happy that Nineveh repents  and that God is merciful! He would arrange things very much better!

And so might we. But again and again God reminds us our ways are not his ways, and more’s the pity! For us.

But the patience we lack with others, he lavished on us.

Makes you think, doesn’t it. Let it drive you to prayer too! And draw you, happily, to life. 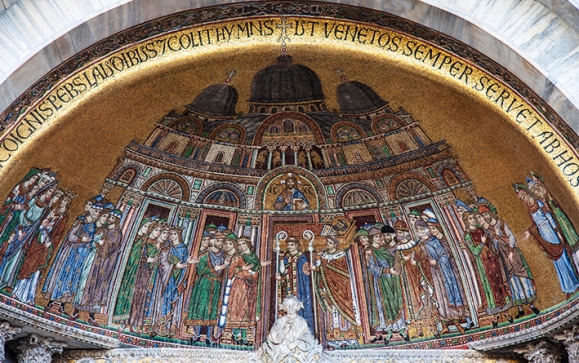 With the first Sunday of Advent began a new liturgical year, characterised on Sunday’s by the reading of the Gospel of Mark. This Sunday, the 2nd of Advent, we are taken to the beginning of Mark’s Gospel, and the beginning of the public ministry of Jesus.

The beginning of the Good News about Jesus Christ, the Son of God. It is written in the book of the prophet Isaiah:

Look, I am going to send my messenger before you;
he will prepare your way.
A voice cries in the wilderness:
Prepare a way for the Lord, make his paths straight.

and so it was that John the Baptist appeared in the wilderness, proclaiming a baptism of repentance for the forgiveness of sins. All Judaea and all the people of Jerusalem made their way to him, and as they were baptised by him in the river Jordan they confessed their sins. John wore a garment of camel-skin, and he lived on locusts and wild honey. In the course of his preaching he said, ‘Someone is following me, someone who is more powerful than I am, and I am not fit to kneel down and undo the strap of his sandals. I have baptised you with water, but he will baptise you with the Holy Spirit.’

Tradition suggests that Mark’s Gospel was written in Rome, for a community whose security was shaken by persecution and apostasy. Mark relates Gospel, apparently basing his account on the personal memories of St. Peter, to restore the community to faith and faithful living.

The beginning of the beginning is a tale of the forgiveness of sins, of restoration and healing. There is comfort here for Israel, for that broken community in Rome, and for us.

Photograph is of mosaic at West Front of St Mark’s, Venice – traditional burial place of St Mark – showing the basilica as it was in the 13th Century. (c) 2008, Allen Morris

The first reading of Sunday’s Mass, the 26th in Ordinary Time, was uncompromising in its view of the seriousness of sin and the liberation that comes as a result of repentance.

The word of the Lord was addressed to me as follows: ‘You object, “What the Lord does is unjust.” Listen, you House of Israel: is what I do unjust? Is it not what you do that is unjust? When the upright man renounces his integrity to commit sin and dies because of this, he dies because of the evil that he himself has committed. When the sinner renounces sin to become law-abiding and honest, he deserves to live. He has chosen to renounce all his previous sins; he shall certainly live; he shall not die.’