It is truly right and just, our duty and our salvation,
always and everywhere to give you thanks,
Lord, holy Father, almighty and eternal God.

For you anointed your Only Begotten Son,
our Lord Jesus Christ, with the oil of gladness
as eternal Priest and King of all creation,
so that, by offering himself on the altar of the Cross
as a spotless sacrifice to bring us peace,
he might accomplish the mysteries of  human redemption
and, making all created things subject to his rule,
he might present to the immensity of your majesty
an eternal and universal kingdom,
a kingdom of truth and life,
a kingdom of holiness and grace,
a kingdom of justice, love and peace.

And so, with Angels and Archangels,
with Thrones and Dominions,
and with all the hosts and Powers of heaven,
we sing the hymn of your glory,
as without end we acclaim:

The Preface of the Day, above, is a song of thanksgiving to the Father for Jesus and the Kingdom

Jesus’ ministry began with a proclamation of the nearness of the Kingdom of God and at the Year’s end, and the Year of Mercy we recall the nature of that kingdom. It is so different to at least some current tendencies with regard to the kingdoms of this world.

And yet, as Jesus said, this kingdom,

is close at hand, and we have but to want it and keep trying to live it, and then – by God’s grace – we are there, blessed citizens of his kingdom.

The Psalm at Mass tomorrow, the 12th Sunday in Ordinary Time, speaks of a yearning for God: a longing for the one who alone can satisfy the deepest needs of the human person.

O God, you are my God, for you I long;
for you my soul is thirsting.
My body pines for you
like a dry, weary land without water.

So I gaze on you in the sanctuary
to see your strength and your glory.
For your love is better than life,
my lips will speak your praise.

So I will bless you all my life,
in your name I will lift up my hands.
My soul shall be filled as with a banquet,
my mouth shall praise you with joy.

For you have been my help;
in the shadow of your wings I rejoice.
My soul clings to you;
your right hand holds me fast.

Many and delightful are the other created goods which God provides for our well-being; still more are the relationships and the products of human culture than can enrich our lives.

And yet each of these are founded on God and his being. Ultimately it is in and from God that they find their truest meaning. And without our recognising this and making that part of our appreciation of them (and God!) they can become a source of distress and grief, draining from us authentic life and love. It is because of this that God and God’s love is better than life: No God no life, but in God life and goodness without end. 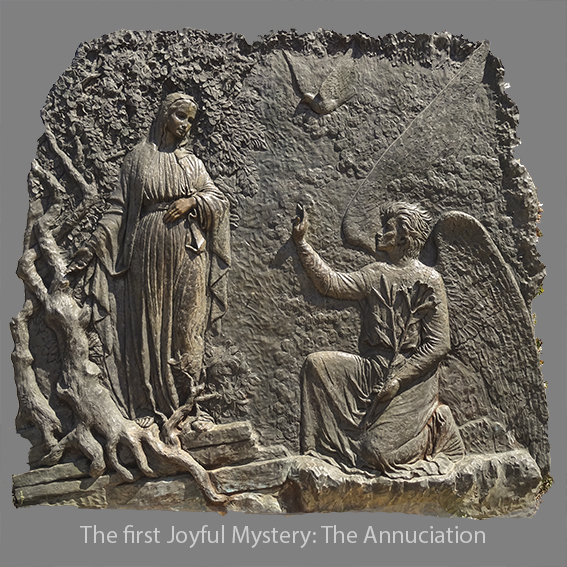 Praying the Rosary in October

The first reading on Ascension Sunday was the first verses of one of the Church’s ‘Easter’ books, the Acts of the Apostles.

The disciples are privileged in being so close to the Lord, but in their being transfixed, gawping, they do not present so admirable a set of figures.

But probably neither do we, on many occasions.

Christians are greatly privileged in many ways, but we also have our faults and flaws, as individuals and as communities. They are probably unavoidable, at least this side of heaven, and if they keep us humble, they probably serve us well, as we seek to serve others. 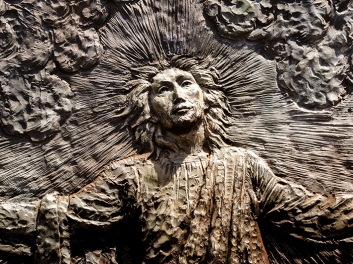 Photographs are details of the Rosary Station: The Ascension (Hill of the Apparitions, Medjugorje). (c) 2014, Allen Morris

The Second reading on Sunday, the fourth Sunday of Easter, comes from the 1st letter of St John. It calls us to be awake and alert to all God has done for us.

Think of the love that the Father has lavished on us,
by letting us be called God’s children;
and that is what we are.
Because the world refused to acknowledge him,
therefore it does not acknowledge us.
My dear people, we are already the children of God
but what we are to be in the future has not yet been revealed;
all we know is, that when it is revealed
we shall be like him
because we shall see him as he really is.

As with most families what helps us to be who we are and to become who we are to become happens as we share in the family meals and the family stories. These can limit us and constrain us, or open our hearts, minds and lives to the newness that is available to us.

Photograph of station of Mystery of Institution of the Eucharist, Medjugorje. (c) 2015, Allen Morris.