Alleluia, alleluia!
Your words are spirit, Lord, and they are life;
you have the message of eternal life.
Alleluia!

On Sunday, the 28th Sunday of Ordinary Time, the first of the alternative Gospel Acclamations has us sing in praise of the power and dignity of the word of God.

What is true of all Scripture is especially true of the Gospels, that we honour at that point of the Mass. We indicate that special honour of the Gospels, that tell us most directly of Jesus by relating the story of his life, ministry and teaching, in a variety of ritual ways. These may be so familiar to us that we fail to note them and their number.

There should be no missing the great dignity of this moment in our celebration.

But the greater glory is not the ritual of our preparation to greet the word, but the word itself proclaimed, that (who) is Christ himself, personally present and speaking to all, and to each individually – heart to heart. He speaks  – to us all and to each of us in our particularity – and calls us to newness of life in him.

His words challenge, comfort, affirm and, always, invite us to come closer to him, to live in him, by him.

The sacramental dialogue of prayer and life that he invites us to includes the whole of the Mass, but the proclamation of the Gospel is an especially important moment in this dialogue. 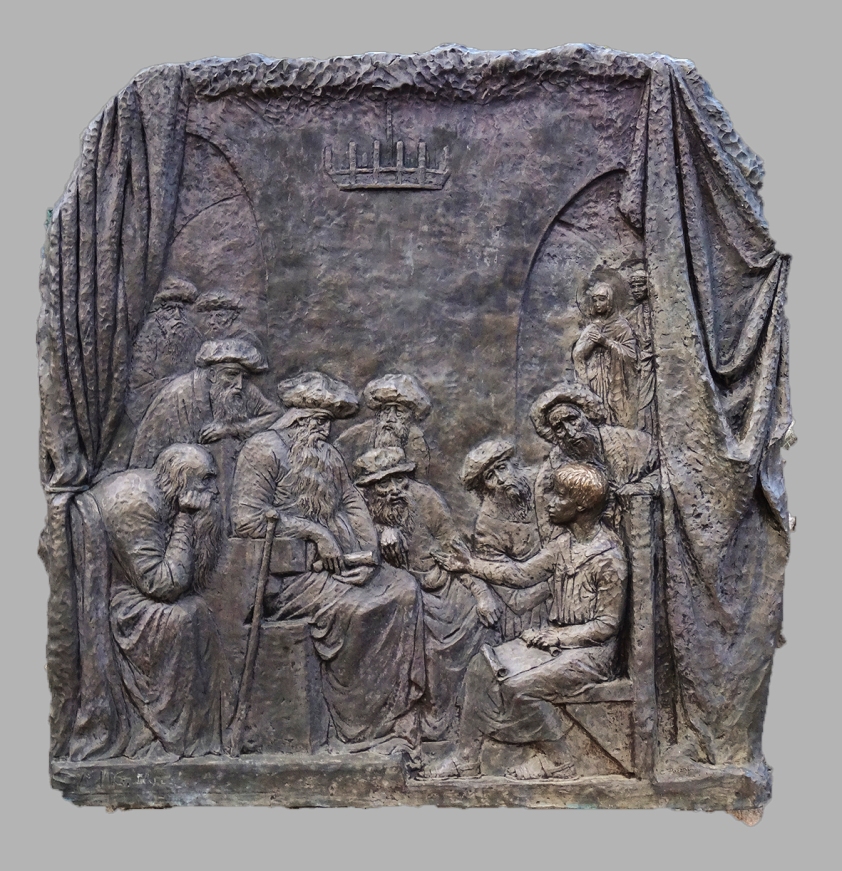 Perhaps our thoughts are very much focussed on the celebration of Christmas Day, but the season of Christmas begins also, and its first Sunday is close at hand.

The first Sunday of Christmas is kept as a feast of the Holy Family.

The Gospel on Sunday comes from Luke’s Gospel, and the Babe of Bethlehem is growing up:

Every year the parents of Jesus used to go to Jerusalem for the feast of the Passover. When he was twelve years old, they went up for the feast as usual. When they were on their way home after the feast, the boy Jesus stayed behind in Jerusalem without his parents knowing it. They assumed he was with the caravan, and it was only after a day’s journey that they went to look for him among their relations and acquaintances. When they failed to find him they went back to Jerusalem looking for him everywhere.

Three days later, they found him in the Temple, sitting among the doctors, listening to them, and asking them questions; and all those who heard him were astounded at his intelligence and his replies. They were overcome when they saw him, and his mother said to him, ‘My child, why have, you done this to us? See how worried your father and I have been, looking for you.’ ‘Why were you looking for me?’ he replied ‘Did you not know that I must be busy with my Father’s affairs?’ But they did not understand what he meant.

He then went down with them and came to Nazareth and lived under their authority. His mother stored up all these things in her heart. And Jesus increased in wisdom, in stature, and in favour with God and men.

It is only Luke, and only in this story, who tells us anything of Jesus’ early years and Mark tells us nothing at all of the time before that public life. The focus of the Gospels is on the events and teaching of his public ministry.

And yet childhood, spiritual childhood, is a prominent theme in that ministry, highlighted (even) in Mark. The spirituality of childhood is focussed on directness, and simplicity and dependence, on qualities that engender love, trust, service.

Christmas comes to draw us into a deeper sharing in those qualities. God becomes a child to restore us to our better selves.

Image of the child Jesus in the Temple. Hill of Apparitions, Medjugorje. (c) 2015, Allen Morris.