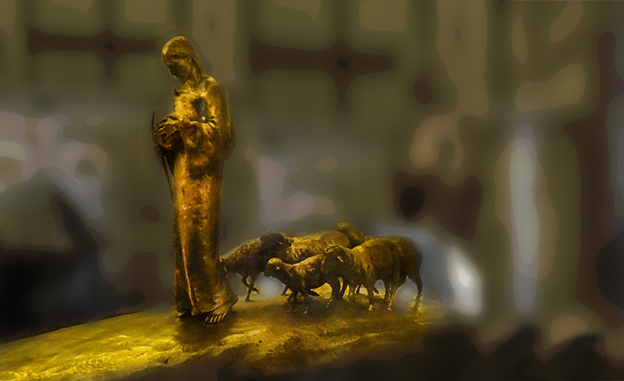 ‘I tell you most solemnly, anyone who does not enter the sheepfold through the gate, but gets in some other way is a thief and a brigand. The one who enters through the gate is the shepherd of the flock; the gatekeeper lets him in, the sheep hear his voice, one by one he calls his own sheep and leads them out. When he has brought out his flock, he goes ahead of them, and the sheep follow because they know his voice. They never follow a stranger but run away from him: they do not recognise the voice of strangers.’

Jesus told them this parable but they failed to understand what he meant by telling it to them.

So Jesus spoke to them again:

‘I tell you most solemnly,
I am the gate of the sheepfold.
All others who have come
are thieves and brigands;
but the sheep took no notice of them.
I am the gate.
Anyone who enters through me will be safe:
he will go freely in and out
and be sure of finding pasture.
The thief comes
only to steal and kill and destroy.
I have come
so that they may have life and have it to the full.’

The Gospel on Sunday – the 4th Sunday of Easter – speaks of the ministry of Jesus to the world. He calls us to health and safety; extending to us protection and care.

And yet we hesitate, again and again. In the passage above we see that enacted by the disciples failure even to understand what he says, let alone respond to it sensibly, grateful for the goodness that is offered them! 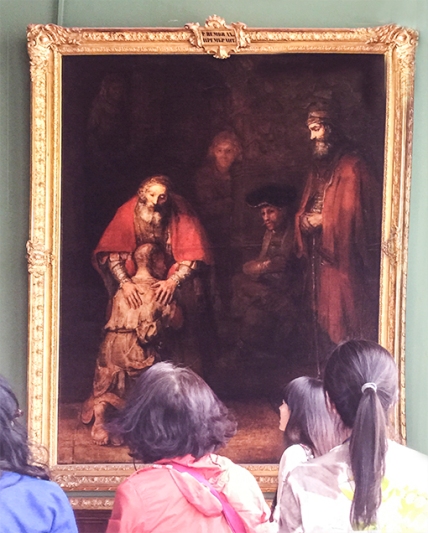 The Gospel passage  to be proclaimed on Sunday, the 24th in Ordinary Time, is a long one.

The tax collectors and the sinners were all seeking the company of Jesus to hear what he had to say, and the Pharisees and the scribes complained. ‘This man’ they said ‘welcomes sinners and eats with them.’ So he spoke this parable to them:
‘What man among you with a hundred sheep, losing one, would not leave the ninety-nine in the wilderness and go after the missing one till he found it? And when he found it, would he not joyfully take it on his shoulders and then, when he got home, call together his friends and neighbours? “Rejoice with me,” he would say “I have found my sheep that was lost.”

In the same way, I tell you, there will be more rejoicing in heaven over one repentant sinner than over ninety-nine virtuous men who have no need of repentance.
‘Or again, what woman with ten drachmas would not, if she lost one, light a lamp and sweep out the house and search thoroughly till she found it? And then, when she had found it, call together her friends and neighbours? “Rejoice with me,” she would say “I have found the drachma I lost.” In the same way, I tell you, there is rejoicing among the angels of God over one repentant sinner.’

He also said, ‘A man had two sons. The younger said to his father, “Father, let me have the share of the estate that would come to me.” So the father divided the property between them. A few days later, the younger son got together everything he had and left for a distant country where he squandered his money on a life of debauchery.

‘When he had spent it all, that country experienced a severe famine, and now he began to feel the pinch, so he hired himself out to one of the local inhabitants who put him on his farm to feed the pigs. And he would willingly have filled his belly with the husks the pigs were eating but no one offered him anything. Then he came to his senses and said, “How many of my father’s paid servants have more food than they want, and here am I dying of hunger! I will leave this place and go to my father and say: Father, I have sinned against heaven and against you; I no longer deserve to be called your son; treat me as one of your paid servants.” So he left the place and went back to his father.

‘While he was still a long way off, his father saw him and was moved with pity. He ran to the boy, clasped him in his arms and kissed him tenderly. Then his son said, “Father, I have sinned against heaven and against you. I no longer deserve to be called your son.” But the father said to his servants, “Quick! Bring out the best robe and put it on him; put a ring on his finger and sandals on his feet. Bring the calf we have been fattening, and kill it; we are going to have a feast, a celebration, because this son of mine was dead and has come back to life; he was lost and is found.” And they began to celebrate.

‘Now the elder son was out in the fields, and on his way back, as he drew near the house, he could hear music and dancing. Calling one of the servants he asked what it was all about. “Your brother has come” replied the servant “and your father has killed the calf we had fattened because he has got him back safe and sound.” He was angry then and refused to go in, and his father came out to plead with him; but he answered his father, “Look, all these years I have slaved for you and never once disobeyed your orders, yet you never offered me so much as a kid for me to celebrate with my friends. But, for this son of yours, when he comes back after swallowing up your property – he and his women – you kill the calf we had been fattening.”

‘The father said, “My son, you are with me always and all I have is yours. But it was only right we should celebrate and rejoice, because your brother here was dead and has come to life; he was lost and is found.”’

It is permitted ro proclaim just the first part, the parables of the good shepherd and diligent woman – but that would be to omit the parable of the father and his two sons, which is so potent a story, in terms of our understanding of God, and of ourselves. 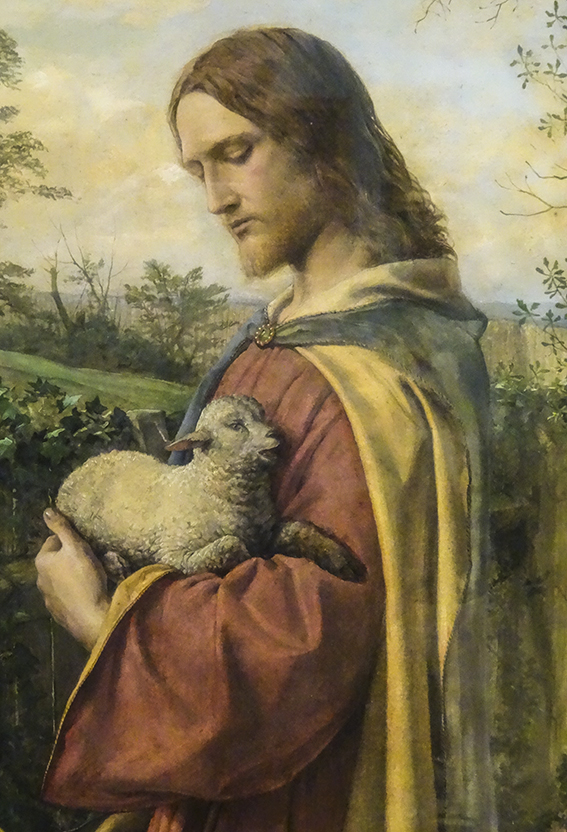 O God, from whom all good things come,
grant that we, who call on you in our need,
may at your prompting discern what is right,
and by your guidance do it.
Through our Lord Jesus Christ, your Son,
who lives and reigns with you in the unity of the Holy Spirit,
one God, for ever and ever.

The Collect also reminds us that when we realise there is a gap, that we have failed in the good, or that we have a need that alone we cannot meet, there is God for us. His love, his care, his prompting and his guidance are there for us to help. 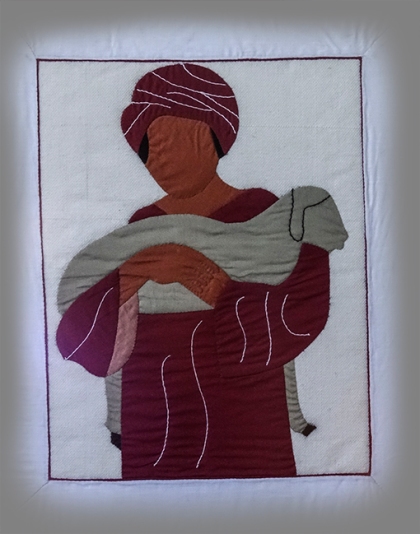 The Gospel reading, yesterday, Sunday, the 4th Sunday of Easter, spoke of the relationship between the Shepherd and his sheep between Jesus, the Good Shepherd, and his sheep, the Church

Jesus said:
‘The sheep that belong to me listen to my voice;
I know them and they follow me.
I give them eternal life;
they will never be lost
and no one will ever steal them from me.
The Father who gave them to me is greater than anyone,
and no one can steal from the Father.
The Father and I are one.’

Considered in a narrow way the relationship between shepherd and sheep can seem exclusive – separating the Church from the world. A broader reading of the Gospel in John, even in terms of this same imagery of shepherd and sheep reminds that the Lord’s care is broader, there are sheep not (yet) of this fold and they too are precious too him.

And precious too for the Church called to see in thefaces of these others, brothers and sisters in the family of God. God, the source of our Original Unity, seeks to shepherd us to a restored unity, with each other and in him. 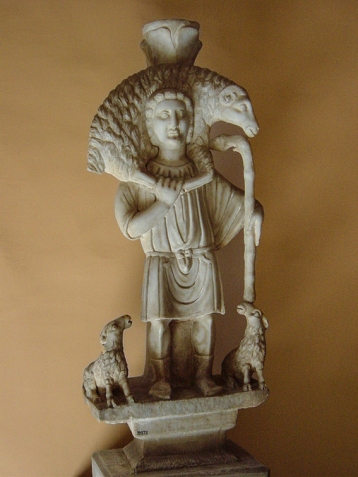 The second reading at Mass on Sunday – the 5th Sunday of Lent – came from the letter to the Hebrews. Unless you were using the alternative series of readings (proper to Year A, and which must be used when the 3rd Scrutiny is celebrated,or when they are preferred) – in which case the 2nd reading was from Paul’s letter to the Romans, a reading you will find at the end of this post.

The passage from the Letter to the Hebrews speaks of the suffering of Christ.

It is a suffering endured for us. In a fallen world it is the price of love. It is a price the Lord is willing to pay.

And how humbling for us is that.

During his life on earth, Christ offered up prayer and entreaty, aloud and in silent tears, to the one who had the power to save him out of death, and he submitted so humbly that his prayer was heard. Although he was Son, he learnt to obey through suffering; but having been made perfect, he became for all who obey him the source of eternal salvation.

Photograph of the Good Shepherd is of figure in the Greco-Roman museum in Alexandria. (c) 2004, Allen Morris.

People who are interested only in unspiritual things can never be pleasing to God. Your interests, however, are not in the unspiritual, but in the spiritual, since the Spirit of God has made his home in you. In fact, unless you possessed the Spirit of Christ you would not belong to him. Though your body may be dead it is because of sin, but if Christ is in you then your spirit is life itself because you have been justified; and if the Spirit of him who raised Jesus from the dead is living in you, then he who raised Jesus from the dead will give life to your own mortal bodies through his Spirit living in you.