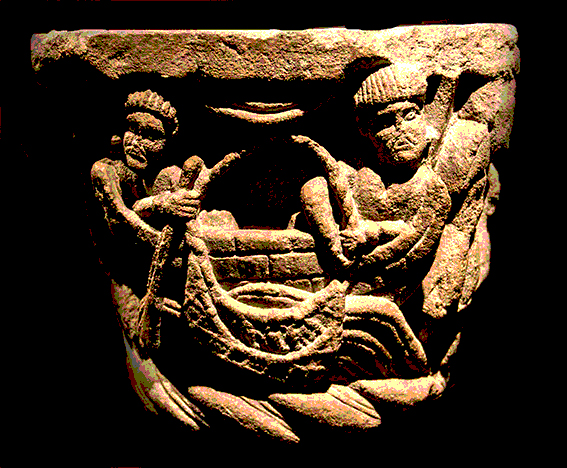 Jesus said to the crowds, ‘The kingdom of heaven is like treasure hidden in a field which someone has found; he hides it again, goes off happy, sells everything he owns and buys the field.

‘Again, the kingdom of heaven is like a merchant looking for fine pearls; when he finds one of great value he goes and sells everything he owns and buys it.

‘Again, the kingdom of heaven is like a dragnet cast into the sea that brings in a haul of all kinds. When it is full, the fishermen haul it ashore; then, sitting down, they collect the good ones in a basket and throw away those that are no use. This is how it will be at the end of time: the angels will appear and separate the wicked from the just to throw them into the blazing furnace where there will be weeping and grinding of teeth.

‘Have you understood all this?’ They said, ‘Yes.’ And he said to them, ‘Well then, every scribe who becomes a disciple of the kingdom of heaven is like a householder who brings out from his storeroom things both new and old.’

The Gospel on Sunday, the 16th Sunday in Ordinary Time, presents us with a series of parables that engage us with the reality that is the Kingdom of Heaven.

This Kingdom is something that is worth everything we own, and it is something we can gain or lose through our own ‘work’  – even if it is also and entirely God’s gracious gift!

The gift is freely given, but we need a certain wisdom and persistence if we are to be possessed by it.

One thought on “Speak Lord: Our prize”