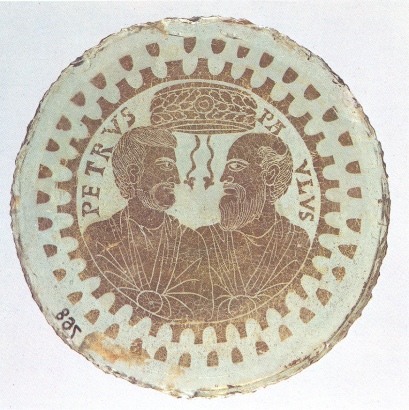 The first reading from the Mass of the Day on Sunday, the feast of Sts Peter and Paul follows.

Read it quietly and carefully.

Notice what emotions it evokes in you and bring them to God in prayer.

King Herod started persecuting certain members of the Church. He beheaded James the brother of John, and when he saw that this pleased the Jews he decided to arrest Peter as well. This was during the days of Unleavened Bread, and he put Peter in prison, assigning four squads of four soldiers each to guard him in turns. Herod meant to try Peter in public after the end of Passover week. All the time Peter was under guard the Church prayed to God for him unremittingly.

On the night before Herod was to try him, Peter was sleeping between two soldiers, fastened with double chains, while guards kept watch at the main entrance to the prison. Then suddenly the angel of the Lord stood there, and the cell was filled with light. He tapped Peter on the side and woke him. ‘Get up!’ he said ‘Hurry!’ – and the chains fell from his hands. The angel then said, ‘Put on your belt and sandals.’ After he had done this, the angel next said, ‘Wrap your cloak round you and follow me.’ Peter followed him, but had no idea that what the angel did was all happening in reality; he thought he was seeing a vision. They passed through two guard posts one after the other, and reached the iron gate leading to the city. This opened of its own accord; they went through it and had walked the whole length of one street when suddenly the angel left him. It was only then that Peter came to himself. ‘Now I know it is all true’ he said. ‘The Lord really did send his angel and has saved me from Herod and from all that the Jewish people were so certain would happen to me.’

In this world terrible things happen, and for often petty reasons (…seeing that it pleased the Jews he had beheaded James, Herod arrested Peter…).

Sometimes they happen to us and can shock us to the core.

Yet always God is there for us – and though the care of God may not always be experienced in so practical and immediate form as Peter experiences in this his care is there, and can give us remarkable poise, beyond our own achieving, in times of trial.

Image is of a glass disk, probably the base of a bowl or cup, depicting the Apostles of Rome, Peter and Paul.